Welcome back to Air Fryer Bro, the place where I uncover some of the myths and commonly asked questions around air fryers. Today we are tackling the idea of opening up your air fryer whilst it is busy cooking your favorite french fries or chicken……is it OK or is it a big ‘no-no’ in the air fryer world? Let’s discuss together.

Can I Open My Air Fryer While it is Cooking?

The simple answer here is yes, it is perfectly safe to open up an air fryer whilst it is cooking. This is because almost all air fryers sold on the market have an automatic shut-off feature that will sense when the air fryer is open and will immediately stop the cooking process.

I have owned many air fryers, from cheap generic Chinese branded ones to full on air fryer ovens, and all of these came with an auto shutoff feature when the air fryer basket or oven door is opened.

How Do I Know my Air Fryer has an Auto Shutoff Feature?

If an air fryer has an auto shutoff feature, two things should happen when you remove the basket or open the oven door. The powerful fan that drives the hot air used to cook in an air fryer will turn off or significantly reduce its speed. You should notice an audible difference in sound levels as the air fryer goes into a paused state. Also, the cook timer on your air fryer should freeze at the point that you opened up your air fryer.

If these two things happened, you can be pretty sure your air fryer has an auto shutoff feature. If it still isn’t clear, then you should contact the manufacturer of your air fryer to get further clarification. And be aware that when they state ‘auto shut off’ in the product listing, sometimes they just mean it turns off at the end of the timer cycle, not that it will pause when you open the basket. This may need to still be clarified with the manufacturer. Luckily, it is very easy to ask this question on Amazon if someone else hasn’t already 🙂

Do Most Air Fryers Really Have an Auto Shutoff Feature?

The simple way to answer this is to look at the top ten selling air fryers on Amazon at the time of writing and see how many of them have an auto shutoff feature. This should give us a decent idea as to how common this feature is.

As you can see from the above list, the only real outlier is Ninja, who really should get on the case and add an auto shutoff feature to all their air fryers. Other than that, it is pretty standard.

What Can I Do if my Air Fryer Doesn’t have an Auto Shutoff Feature?

Any Considerations for Using an Air Fryers Auto Shutoff Feature?

Not really, just to be aware that even though the sensors used are usually pretty reliable, this may fail (especially in cheaper air fryers) over time. Always pay attention when opening your air fryer during cooking. If the fan is still active when you pull the basket out or open the oven door, this may indicate that the sensors have failed and the auto shutoff feature is no longer working. Also, as stated above, see if the cooking timer has frozen.

Why Would I Want to Open Up My Air Fryer Whilst it is Cooking?

During my many years of air fryer use, I have only really needed to open up my air fryer during its cooking cycle when I want to check on how ‘crisped up’ or ready to eat the food is inside. Or sometimes I like to turn over certain food halfway through its cook time and apply a spray of oil to help it crisp up more. I also like to shake any food that is quite close together (such as a big batch of french fries) to help them to cook evenly. I do this halfway through the cook time.

This auto shutoff feature is also desirable to people who have children at home. If a child’s curiosity gets the better of them and they open up the air fryer during a cooking cycle, it is reassuring to know that the unit will automatically stop cooking and pushing out all that hot air 🙂 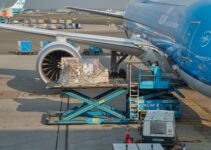